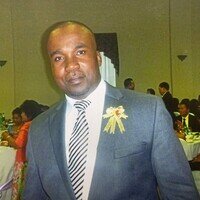 Please share a memory of Monehm to include in a keepsake book for family and friends.
View Tribute Book
Dearly called “Mo” by his wife, “Maitre Mo”, “Momo emo”, by his family, “big Mo” by friends, or just “Mo” or Monehm by other acquaintances, our beloved Monehm joined our creator on the 23rd of December, 2022. Monehm was born in Haiti on 02/03/1978. He emigrated to the Unit- ed States in October of 1993 and has lived in Norwalk, CT. Ever so timid yet friendly, he was a very devoted person, always willing and at the services of others. Monehm was a wonderful husband, father, son, brother, uncle, cousin, and friend. Monehm was preceded in death by his father, Joseph Pierre. He is survived by his wife, Vonie Pierre. His children, Ebony Pierre- Gomez, Sean and Fahimah Pierre. His mother Jeanine Pierre. His Sisters, Geralda Angrand, Dorotie Phillippe, Farah Royal. His mother-in-law, Jeanne Amicia Jeudy. His brothers-in-law, Ketnel Angrand, Christian Phillippe, Regolio Royal, Adony Maude. His sisters in law, Enithe Jeudy, Anthonia Maude, Denise Maude, Ireland Maude. His nieces and nephews, Ramcess Jeudy, Bryanna Poulard, christian Alexander Phillippe, Kayla Angrand, Abigail, Nathan, and Matthew Royal. His many cousins, aunts, uncles, and many other loving family members. You will be missed Mo. Your memories we will treasure. Loving you always. Forgetting you never. Godspeed Monehm. Safe Journey Home! May you rest with God in his Glory! The wake will be held at Raymond Funeral home, 5 E wall St Norwalk, CT on Friday January 6th, 5-8PM. The funeral service will be at St Joseph’s Catholic Church, 85 S Main ST, Norwalk, CT on Saturday January 7th at 9AM. Burial will be at Riverside Cemetery.
Saturday
7
January

Share Your Memory of
Monehm
Upload Your Memory View All Memories
Be the first to upload a memory!
Share A Memory
Plant a Tree