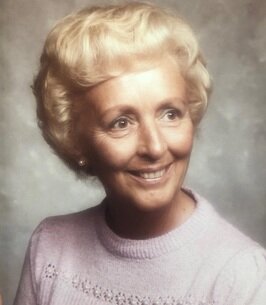 Please share a memory of Virginia to include in a keepsake book for family and friends.
View Tribute Book
Virginia Pegg (Robinson) Adcook, age 94, of Fayetteville, NY passed away peacefully on July 9, 2019. Virginia was born on September 27, 1924 in Bridgeport, CT to Edith Bartram Burr and Marshall Franklin Pegg. After graduating from Stratford High School in 1942 she went to work at General Electric where she met Robert (Robby) Robinson. Virginia and Robby were married in 1944 and moved to Syracuse, NY where Robby had a long career with General Electric. Virginia was active in her church and kept busy with activities involved in raising four children. She loved knitting, sewing, and crafts, which she sold in gift shops in the Syracuse area. She was also an avid gardener and her flower beds were alive with color throughout the summer. Over the last 25 years Virginia has been involved in genealogy and traced some of her ancestors back to the 1600s. Virginia married Harold Adcook in 1983 with whom she shared a love of traveling. Virginia was a founding member of Northminster Presbyterian Church, a member of the Aaron Burr Association, the Comfort Tyler Chapter of the Daughters of the American Revolution, the Lakeshore Yacht and Country Club, and the Manlius Senior Center where she had a circle of friends with whom she enjoyed playing bridge, Mahjongg, and Bunko. Virginia was predeceased by her husbands, Robert Robinson and Judge Harold Adcook, and her parents, Edith and Marshall Pegg. She is survived by her four children, Linda Robinson Sanders of Syracuse, Dede Robinson (Rick) Bailer of Virginia, Robert (Karen) Robinson of Maryland, and Peter (Nancy) Robinson of Texas, and her brother, Robert Pegg of New Hampshire. She is also survived by eight grandchildren, 15 great grandchildren, one great-great grandchild, and several nieces and nephews. She had many wonderful friends who were like family to her and she was blessed to have kind and loving neighbors. Burial is Friday, September 23, 2022 at 11:00 a.m. at Riverside Cemetery in Norwalk, CT.
Friday
23
September

Share Your Memory of
Virginia
Upload Your Memory View All Memories
Be the first to upload a memory!
Share A Memory
Plant a Tree