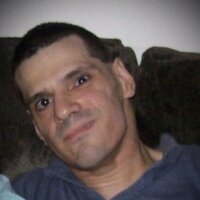 Please share a memory of George to include in a keepsake book for family and friends.
View Tribute Book
If Eddie Van Halen is jamming on a stage in heaven, we suspect George Kitmiridis is sitting in the front row playing air guitar and singing along. George passed away on August 11, 2022, after a long battle with oral cancer. We lost a wonderful man and gentle soul known for his integrity and desire to put others' needs before his own. George was born in Boston, MA, on June 19, 1971, the son of the late Efstathios and Maria Kitmiridis. He grew up in Norwalk, CT, and was an honor student at Brian McMahon High School. The friends he made in high school would remain his most cherished. He enjoyed a variety of passions, including writing, playing the lotto, watching football, and listening to music. He was particularly proud of his book Clocks. The book tells the story of two dysfunctional families and the stresses of everyday life. Listening to music was his favorite pastime. He amassed hundreds of CDs which included a wide range of genres. Music was always playing in the background, and he found great joy in introducing his guests to a new song or an artist. Also Known as a Mnomnist, George had the incredible ability to remember lists of information, such as names, phone numbers, and birthdays. It was not unusual to receive a phone call from George wishing you a happy birthday or anniversary. George is survived by his brother, Nick Kitmiridis: his four nephews: Evangelos (Angelo) Papachristou, Lazaros Papadopolous, Vlasios Papadopoulos, and Esfstathios Kitmiridis; his niece Evdoxia (Sula) LoBue and his treasured friend Kevin Forsburg. He was preceded in death by his parents and his sisters, Parthena (Penny) Papachristou and Sophia Papadopolous. Private services were held at St. George Greek Orthodox Church in Norwalk. Burial followed at Riverside Cemetery in Norwalk. We'll miss that silly grin, Godspeed.

Share Your Memory of
George
Upload Your Memory View All Memories
Be the first to upload a memory!
Share A Memory
Plant a Tree