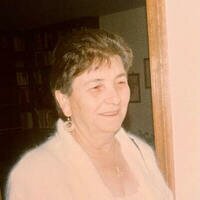 Please share a memory of Despina to include in a keepsake book for family and friends.
View Tribute Book
Despina Simoulidis, 90, passed away on April 13, 2022 in Norwalk, CT. Despina was born in Vrita, Edessis, Greece on April 17, 1931 to Athanasios and Isaia Ouzounidis. She relocated to Agios Loukas, Greece, where she met and married her husband, Nikolaos Simoulidis, in 1951. Their family relocated to Norwalk, CT in 1965. She was a night owl that loved watching country western movies, spending her summers in Lake George keeping up with her thriving garden, and sitting outside drinking her extra sweet Greek coffee. Her grandchildren and great grandchildren will always remember her playful nature that always kept them laughing. Left behind to love her eternally are her two children, Efrosyni Simoulidis, Christos and wife Despina Simoulidis. Her grandchildren Nikolaos, Panagiotis, Martha Simoulidis, Irini Gkiaourakis, Christos and Eleni Petridis. Her great grandchildren Christos, Michalis, Christos, Alexi, Nikitas Simoulidis and Elisavet, Thespina and Yiannis Gkiaourakis. Her funeral will be held at St. George Greek Orthodox Church in Norwalk on Monday, April 18th at 10:00 am. The burial will follow at Riverside Cemetery in Norwalk.
Monday
18
April

Share Your Memory of
Despina
Upload Your Memory View All Memories
Be the first to upload a memory!
Share A Memory
Plant a Tree