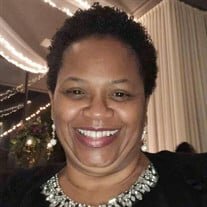 Please share a memory of Jamie to include in a keepsake book for family and friends.
View Tribute Book
Jamie Colleen Garnett, age 58, transitioned peacefully on February 28, 2022 at Bridgeport Hospital. She was born September 19, 1963 in Norwalk, Connecticut to the late Nathaniel McClendon and Rosezena Whitaker McClendon. She served honorably in the National Guard and was employed with the United Food and Commercial Workers 371 for a number of years. She attended Brio Academy of Cosmetology in Fairfield, Connecticut. Her love, devotion and commitment to family and friends will be treasured. Jamie is survived by her husband of over twenty years Kyle Garnett, loving daughters, Sheena Latrice Mercer and Kiyah Emoni Garnett, her brother, Irving McClendon, five sisters, Robin Shoemaker (Doug), Karen Bray (Eric), Cheryl McClendon, Roslyn McClendon, Edith DelValle (Julio), her goddaughter Heidi Bledsoe, three aunts, Christina White, Phylllis Harrison and Barbara Glover (Alonzo) and a host of extended family and friends. She was preceded in death by her sister, Juanita McClendon, three brothers, Nathaniel McClendon, Jr., Thomas McClendon and Karl McClendon. Visitation will be held on Tuesday, March 8, 2022 from 10:00 am – 11:00 am, followed by a service of celebration at 11:00 am at Calvary Baptist Church, 21 Concord St., Norwalk, Connecticut. Pastor Ken Smith of Kingdom Builders Impact Ministry, officiating. Interment will follow at Riverside Cemetery, Norwalk, CT.

Share Your Memory of
Jamie
Upload Your Memory View All Memories
Be the first to upload a memory!
Share A Memory
Plant a Tree