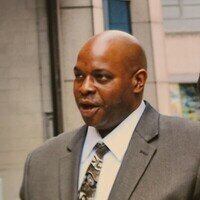 Please share a memory of Gary to include in a keepsake book for family and friends.
View Tribute Book
Gary Wayne Peterson was born to Roosevelt and the late Adelle (Smith) Peterson on December 16, 1969. He fell asleep in death on Wednesday, December 29, 2021. Gary was raised in Norwalk, CT and educated in the Norwalk Public Schools System. He later obtained a certificate in electronics from Porter and Chester Institute, Stratford, CT. Gary maintained various jobs in the Sales and Custodial fields, however, his passion was Coaching Basketball. Starting as a coach with local leagues he later held positions with Notre Dame High School, Wilton High School and ultimately Head Coach at Darien High School. Coaching was what truly made him happy and he put his all into it. Gary leaves to cherish his memory his Daughter, Ebony Peterson; his Father, Roosevelt Peterson; his sister, Sharon Peterson; and a host of aunts, uncles, cousins and other relatives and friends. He was pre-deceased by his mother, Adelle (Smith) Peterson.

Share Your Memory of
Gary
Upload Your Memory View All Memories
Be the first to upload a memory!
Share A Memory
Plant a Tree