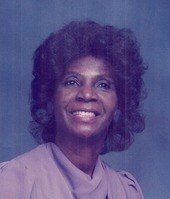 Please share a memory of Eva to include in a keepsake book for family and friends.
View Tribute Book
Eva Stevens, a beloved wife, mother, and friend, died on December 3, 2021, surrounded by her family at the age of 91. She expired while holding fast to the profession of her faith and proclaiming, “I shall not die but live”! This became a reality as she crossed over from time into eternity to live forever in the heavenly kingdom. Eva Stevens affectionately known as “Big Ma” was born on September 9, 1930, to the late James and Alma Jones in Daytona Beach, Florida. She was one of eleven children. At the age of 14, Eva met the love of her life and married the late DeWitt Stevens, Sr. Born from this union were five children: Raymond (deceased), Diantha, Norma Jean, DeWitt, Jr., and Gary. As a young mother, Eva became a homemaker who nurtured her children. To support their family, Eva and her husband relocated to Norwalk, Connecticut. Upon moving to Norwalk, the family experienced the tragic death of their oldest son. Raymond, then 5 years old, was killed by a hit and run drunken driver. Eva was grief stricken and heartbroken by this loss. She expressed that God impressed upon her heart that her four other children needed her and rose to the occasion. During Eva’s life, she and her husband created a loving and well-rounded home of faith and fun. They believed it most important to raise their children in the fear and admonition of God. In addition, they embraced their children’s friends and welcomed them all into their home. All were encouraged to attend church services with them. Eva supported her children’s singing abilities. Her husband formed a gospel singing group featuring his children called “The Stevens Stars”. Eva had a lovely voice and was the featured soloist. The group quickly gained notoriety throughout the East Coast. Eva’s life consisted of living out her faith in Jesus Christ and serving others. Her husband was called into ministry after the death of their son and began evangelizing. During this time, Eva also helped to organize the CT State Ministers’ Wives Association. In 1978, Rev. DeWitt, Sr. founded the Macedonia Church in Norwalk, Connecticut. As a pastor’s wife, Eva wholeheartedly embraced this calling and became a beacon of light, hope, and love. This had a profound effect. To many, she became a loving friend, teacher, role model, and epitomized the word “mother”. She gave great counsel, which attracted many to receive her knowledge for navigating the journey of life. Eva taught young women how to be mothers, wives, and praying women. Her loving heart, caring spirit, and humor caused many to develop appreciation and admiration for the qualities she possessed and the spirit she exuded. Eva and her husband were hospitable and openly welcomed their joy-filled home to individuals who required a safe-haven. She was a lady among ladies who was known for her inward and outward beauty. She possessed sophistication, grace, and great style. Eva was a consummate cook, who willingly offered to all her southern and insatiable meals. She is known for her biscuits, collard greens, gravy, short ribs, and peach cobbler, to name a few. After 62 years of marriage and her husband’s retirement, they became “snowbirds”, leisurely living between their homes in Norwalk, Connecticut and West Palm Beach, Florida. They were world travelers and enjoyed spending time with their grandchildren. Big Ma will forever be missed and her legacy endures in the hearts of all fortunate enough to have shared her time and company. Eva Stevens leaves to cherish her memory her beloved four children, Diantha Reid, Norwalk, Connecticut, Norma Jean (Curtis) Carter, Waikiki, Hawaii, Reverend DeWitt (Addie) Stevens, Jr., Norwalk, Connecticut, and Gary Stevens, Orange County, California. She is survived by siblings, Marion Rivers of Daytona Beach, Florida and Sylvester (Dana) Jones, Sr. of Trumbull, Connecticut; nine grandchildren, Raquel (Sean) Giddiens, Gary Hurdle, Nicole (Beau) Moore, Christopher (Angel) Reid, Janeen Reid, Tiffany (Jermaine) Nash, Kelly Perkins, and Tammie (Sam) Jones; sixteen great-grandchildren; an adopted grandson, Juan Sanchez; four adopted daughters, Dr. Shirley Carlos, Charlene Fuller, Patricia Hudson, and Carolyn Shuler; a close friend, Jeanette Wheeler; the beloved Barnes family; as well as a host of nieces, nephews, relatives, and friends. She is predeceased by her husband, Rev. DeWitt Stevens, Sr., son, Raymond; grandson, DeWitt Stevens, III; son-in-law, Bobby Reid; sisters, Vera, Evelyn, Mabel, Juanita and Callie; and brothers, Johnny, James Jr., and Freddie. The family asks that you remember us in your prayers. She is with her Savior now.

Share Your Memory of
Eva
Upload Your Memory View All Memories
Be the first to upload a memory!
Share A Memory
Plant a Tree