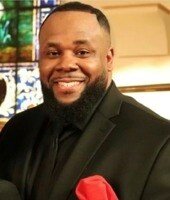 Please share a memory of Dewitt to include in a keepsake book for family and friends.
View Tribute Book
On Friday, August 13, 2021 at 11:26 p.m., DeWitt Stevens, III, surrounded by his father and son, Malique, was escorted by the angels from this life into the eternal presence of God. DeWitt, the only son of Pastor DeWitt, Jr. and Addie Stevens, was born on October 6, 1980, in New Haven, CT. DeWitt was raised in Macedonia Church, founded by his grandfather, the late Rev. DeWitt Stevens, Sr. affectionately known as "Big Daddy, and under the spiritual guidance of his father. He inherited a rich legacy of faith, and character from them and was taught the value of Godly living. He served diligently as a member of the choir, the usher board, and the youth ministry. At a young age, he accepted Jesus Christ as his personal savior. And, although, at times he struggled in his commitment to his faith, his love for Christ was evident in his conversations as well as in the manner in which he carried himself. He constantly expressed that his ultimate goal was to make heaven his home! DeWitt was educated in the Norwalk Public Schools until the end of middle school. After which, he attended Christian Heritage School where he completed his high school education. After graduating high school, DeWitt began his career at Klaff's Home Design and later worked at Dolce Conference Center, where he was employed for ten years. During this time, he realized that he loved serving others and was inspired to change his career path and pursue his lifelong dream of becoming a police officer. In an effort to reach his dream, he obtained employment as a police aide with the Stamford Police Department from 2017 until the time of his death. He was an avid sports fan who enjoyed attending sporting events. His favorite sport teams were most notably the New York Knicks followed by the Jets, and Mets. Visitation will be held on Saturday, August 28, 2021 from 9:00–11:00 a.m., followed by Celebration of Life at 11:00 a.m. at Macedonia Church, 39 West Avenue, Norwalk, CT 06854. Interment will be at Riverside Cemetery, Norwalk. Service by Howard K. Hill Funeral Services, 1287 Chapel St., New Haven. To leave a message of comfort for the family and to read the full obituary, please visit, www.hkhfuneralservices.com.

Share Your Memory of
Dewitt
Upload Your Memory View All Memories
Be the first to upload a memory!
Share A Memory
Plant a Tree