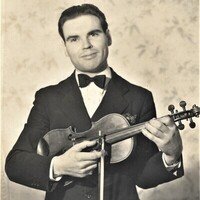 Please share a memory of Alexander to include in a keepsake book for family and friends.
View Tribute Book
Alexander J. Kemény, 103, husband of the late Margaret Toth Kemény of Norwalk, passed away on Friday, August 13, 2021. Born in Norwalk on August 25, 1917, he was the son of the late Janos and Borbola Katonah Kemény. From the age of 5 he was raised in Fony, Hungary returning to America when he was 18, not speaking a word of English. He worked in the Norwalk Hat Factory by day, studying violin at Bridgeport University by night until he was drafted into the Army for WWII. He credits the Army for his learning English during his 5-year stint in the Aleutian Islands. After the war he formed the Alexander Kemény Hungarian Orchestra playing at local restaurants, weddings and church picnics throughout New England. He met his wife of 68 years while performing at the Tokay Restaurant in Fairfield, convincing her to move to Norwalk from Branford, Ontario. He learned the tile contracting business from his father-in-law, Theodore Toth, and ran that business for 30 years until retiring to Boynton Beach, Florida in the late 1980’s. There he enjoyed gardening and cooking. Alex exemplified the “American Dream”, pursuing his love of music and instilling it in his 2 daughters, Cheryl and Alexandrea Kemeny of Norwalk. They got their start singing and playing drums and bass in his orchestra, then went on to their own musical careers culminating in the formation of their non-profit performing arts school, Crystal Theatre located in Norwalk. A devoted father and loving husband he is survived by his 2 daughters, his granddaughter, Hannah Daley and his son-in-law Mariner Pezza as well as his “bodyguards”, Moxie Kemeny and Sammy Kemeny (his favorite dogs). Services with military honors will be held graveside on Monday, August 23, 11:00 AM at Riverside Cemetery, 81 Riverside Avenue, Norwalk. Please join us to celebrate his life. In lieu of flowers, contributions in Alexander’s memory may be made to: Crystal Theatre, www.crystaltheatre.org

Share Your Memory of
Alexander
Upload Your Memory View All Memories
Be the first to upload a memory!
Share A Memory
Plant a Tree