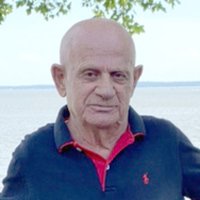 Please share a memory of Theofilos to include in a keepsake book for family and friends.
View Tribute Book
Theofilos "Popeye" Lazarides passed away August 12, 2021 at the Norwalk Hospital. Born in Greece January 15, 1932 he was the son of the late Efstathios and Parthena Kydes Lazarides. Theofilos married his beloved wife Eleni and came to America in 1960 where he worked at Pepperidge Farm until he retired in 1993. He enjoyed Kafeino with his friends and loved raising his children, grandchildren and great-grandchildren He would help anyone at anytime that he could and was very well known in the community. He was a loving husband, father and grandfather and will be missed by many but never forgotten by his beloved family. In addition to his wife Eleni, he is survived by his two daughters Penny Athanasiou and her husband Andoni, and Koula Saltourides and her husband Andy, and his son Steve Lazarides and his wife Olga. He is survived by 7 grandchildren and 3 great-grandchildren, by his brother Nick Lazarides and his wife Sophia and by 5 nephews. He was predeceased by his sisters Eleni Papadopoulos and Niki Manasiadis. Services will be held on Tuesday at 10 AM in St. George Greek Orthodox 238 West Rocks Road, Norwalk, followed by burial in Riverside Cemetery in Norwalk.
Tuesday
17
August

Share Your Memory of
Theofilos
Upload Your Memory View All Memories
Be the first to upload a memory!
Share A Memory
Plant a Tree