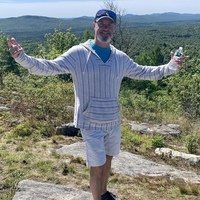 Please share a memory of Frederick to include in a keepsake book for family and friends.
View Tribute Book
Frederick John Maudsley IV passed away unexpectedly on June 6th, 2021, at the age of 54. He was surrounded by his loving family. Frederick was born on April 1, 1967 in Plainfield, NJ. He was a beloved husband, father, grandfather, son, business owner, coach, friend and follower of Christ. He has been married to his bride, Diane, for 29 years, raising a beautiful, tight-knit family together. He loved his children, Kayla, Max, and John, more than life. He was a loving father-in-law to Tanner Petty of Forest, VA, and was absolutely crazy about his 2 year old granddaughter, Eden Marie. He was the son of Frederick John Maudsley III of White Plains, NY, and brother to Lisa Marino of Pawling, N.Y. He has many nieces, nephews, and in-laws who will miss his fun-loving spirit, generosity, and selflessness. Frederick grew up in White Plains, NY and was highly regarded for his unmatched hockey abilities with his quick, strong and fearless play. He is the all time leading scorer in the history of White Plains High School and graduated in 1986. Fred attended Iona College in New Rochelle, NY, where he continued his prolific hockey career as a Division I Hockey player and team captain. Fred graduated in 1990. He met his beautiful and sweet wife Diane during their time at Iona and began their journey together. Fred was known from all corners of the world for his larger than life personality. Every room he walked into instantly became a party, and his presence was always felt. He never hesitated to greet a stranger; Fred loved just being in the same room with the people he cared about. Even if no words were said, he truly embraced the present moment. Nobody was more present than Fred and he made everyone around him feel wanted. He gladly showed up to help anyone in need. He had motivation like no other, and you could often find him working out. Every day was “arm day” for Fred! His love for health and fitness extended to everyone around him, never missing an opportunity to give a handshake, hug, or fist bump both inside and outside of the gym. He continually drove everyone around him to keep going through hard things and he never took no for an answer. He gave constant encouragement as an inspirational coach, and was always the loudest cheerleader. He was “all in” with everything he put his mind to - whether that was coming home and playing “sock attack” with his kids after a 16 hour work day in the city, coaching 3 different sports teams in the same season, cracking jokes to make everyone in the room smile, or simply being there. He never missed a game, play, race, or recital for any of his kids. He took pride in providing for his family, between airport drop offs and pickups, moving furniture into dorm rooms and apartments, and filling up cars with gas. His determination and hard work can be summed up by his days as a broker and a trader in New York City. He’d wake up at 3 am, workout, change into his suit, catch the train, rollerblade to the office, take the train home, coach a baseball game, play with the kids, hug his wife and repeat it every day. All with a huge smile on his face. After working for multiple companies in New York City and Stamford, CT, Fred used his entrepreneurial and personal skills to become a business owner of Crunch Fitness franchise followed by OrangeTheory Fitness gyms in Norwalk and Westport, CT. He was respected and loved by all his staff and OTF family. Fred will always be remembered for his passion to live life to the fullest, to never take a day for granted, always go the extra mile, and always show up and be there for others. He was an incredible provider, loving husband, passionate father and lover of life. The wake will be held at Collins Funeral Home in Norwalk, CT on Friday, June 11th from 5 pm to 8 pm. The funeral will be held at Hope Church in Wilton, CT on Saturday, June 12th at 10 am. In lieu of flowers, the family asks that donations in memory of Frederick be offered to Pivot Recovery Ministries. Fred was passionate about the work that Pivot did to bring restoration and hope to the lives of local community members and spent a number of years as a board member. The link to make a donation is https://www.pivotministries.org/become-a-donor.

Share Your Memory of
Frederick
Upload Your Memory View All Memories
Be the first to upload a memory!
Share A Memory
Plant a Tree