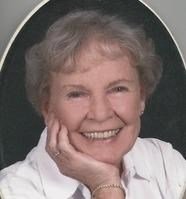 Please share a memory of Marjorie to include in a keepsake book for family and friends.
View Tribute Book
Marjorie D. "Midge" Brown June 14, 1924 - April 19, 2021 Marjorie D. "Midge" Brown, 96, of Westport, Connecticut, passed away peacefully on April 19, 2021, with her family by her side. She was born on June 14, 1924 to the late John and Edith Irving, and had resided in Westport since 1979. She graduated from Norwalk High School in 1941 and later attended Katharine Gibbs College and Norwalk Community College. She spent many years of her career as an executive secretary, working for Machlett Labs, General Electric, Exxon Chemical, and Richardson Vicks, among others. She also worked as a secretary for the Norwalk United Methodist Church, and later as a real estate agent. At Machlett Labs she met her husband, Harry W. Brown, Sr. Together they had two children. She retired in 1989 at the age of 65. Midge enjoyed many hobbies. She loved to read and always had books to lend out to others. Throughout her career, she took several art courses; after retiring, she began painting again and won several prizes for her art. She enjoyed owning and breeding Bichon Frise dogs. She was extremely proud of the yard and garden she personally maintained into her 90s at her home in Saugatuck Shores. Midge was a fierce competitor in family slap solitaire games. She enjoyed playing golf and bridge, was an active member and treasurer for the Norwalk Woman's Club, and was involved in many church activities. Midge was a wonderful hostess and cook, and her home near the water became a favorite gathering place for parties and get togethers. She is survived by two children, daughter Linda K. Brown (Raymond Buckland), of Columbia, CT, and son Harry W. Brown, Jr. (Laurie), of Doylestown, PA; two granddaughters, Alexa L. Siegfried (Edward) and Jessica K. Fine (Noam); and two great-grandchildren, Aimee and Maxwell Siegfried. She is also survived by three siblings, Ruth Tanner, Joan Johnson, and William Irving, as well as numerous nieces and nephews. In addition to her parents, Midge was predeceased by her beloved husband, Harry Sr., who passed away in 1995, and her siblings Jack Irving and Norma Wagner. Midge will always be remembered as a loving wife, mother, grandmother, great-grandmother, aunt, sister, and friend. Interment will be at Riverside Cemetery, Norwalk, CT, next to her husband, and services will be private. In lieu of flowers, please consider a donation to the Alzheimer's Foundation of America, https://fundraising.alzfdn.org/projects/in-memory-of-marjorie-midge-brown/.

Share Your Memory of
Marjorie
Upload Your Memory View All Memories
Be the first to upload a memory!
Share A Memory
Plant a Tree