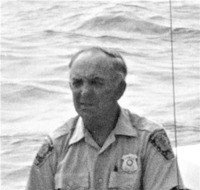 Obituary of Stephen A Kvance

Please share a memory of Stephen to include in a keepsake book for family and friends.
View Tribute Book
Stephen A. Kvance died peacefully at the Norwalk Hospital on January 16, 2021, after a brief illness. He was 92 years old, and lived in Norwalk his entire life. He was predeceased by his loving wife Arletta (Kaske) Kvance and his beloved son, Stephen. After attending Norwalk schools, Steve started to work as a handyman and carpenter. He then joined the Army during the Korean Conflict and was honorably discharged in 1952. Upon returning to Norwalk he resumed work as a carpenter prior to joining the Norwalk Police Dept. in 1961. He is most remembered for the time he served patrolling the Norwalk waters as part of the NPD Marine Division. During this time he received numerous letters and commendations for his work serving the boating community. He retired from the Police Dept. in 1983, but in later years returned to serve the community as a member of the Norwalk Shellfish Commission. He was a member of the South Norwalk Boat Club for over 40 years. After his retirement Steve enjoyed time with his family and friends aboard his boat "Mystique" and the many trips he took to Texas to visit his son. He also looked forward to his dinners with the Fedors, following the Connecticut Sun and UConn Huskies basketball teams, and meeting up with his "older friends" at the Norwalk Inn. He would like to thank his neighborhood helpers, Kathleen, Karey, and Maria for their invaluable assistance which allowed him to remain in his home for his final years. A memorial service will be held (Graveside) at 12Noon, Saturday, April 17th in Riverside Cemetery, 81 Riverside Avenue, Norwalk.

Share Your Memory of
Stephen
Upload Your Memory View All Memories
Be the first to upload a memory!
Share A Memory
Plant a Tree