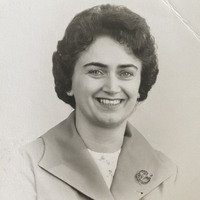 Please share a memory of Valentina to include in a keepsake book for family and friends.
View Tribute Book
Valentina Stefanidis, age 93, beloved wife of Lazaros Stefanidis, passed peacefully in her home in Norwalk, CT on April 8, 2021, surrounded by her loved ones. Born March 7, 1928 in Batumi, Georgia (Former U.S.S.R). She emigrated to Greece to escape the oppression of the U.S.S.R. and met her future husband Lazaros. They moved to the United States to fulfill their dreams of a better life in 1956. Valentina also aided in bringing her parents and siblings to the United States. She worked over the years at several leather factories in Norwalk to support the family. Valentina would often express that everything she did in life was for beloved daughter Ester. She spent hours with her grandchildren, from taking them on walks when they were young in strollers to baking them food whenever they would leave to return to college. Valentina was a devout Christian and active member and contributor to the Greek Orthodox church. With her radiant personality and smile she made many life-long friends within the community. She attended services until she was unable to and would continue to view them on television. She was an avid reader, and enjoyed theater and the arts. She is survived by her husband Lazaros Stefanidis, daughter Ester, and son-in-law Steve, and two grandchildren, Valentina and Lazaros. She is also survived by her brother, Konstantinos Aslanidis, and her much loved nieces and nephews. She was predeceased by her daughter, Ekaterina Stefanidis, and brothers, Panagiotis and Alexandros Aslanidis. May she continue to live on in the hearts in memories of all of the lives she touched.

Share Your Memory of
Valentina
Upload Your Memory View All Memories
Be the first to upload a memory!
Share A Memory
Plant a Tree