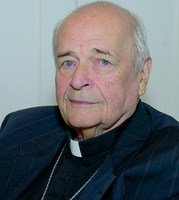 Obituary of Russell B Greene, Jr.

Please share a memory of Russell to include in a keepsake book for family and friends.
View Tribute Book
Rev. Russell B. Greene, Jr. The Reverend Russell B. Greene, Jr. was called to his eternal home on March 7, 2021 after a long and joy-filled life of serving God, his Church, and his family. Reverend Greene was a man of the people and, after leading a rich and selfless life of ministry that lasted almost 60 years, he touched the lives of so many. He loved everyone and everything in his life, and he will be missed more than words can express. Born on February 3, 1932, he was the son of a Lutheran Minister, and a native of Berne, NY. His home church was St. Paul's Lutheran in Berne, NY. Russell studied Forestry at Paul Smith's College in NY. It is here that he "experienced" his call to the ministry. He transferred to Wagner College in Staten Island, NY where he received both his Bachelor of Arts and Master of Science degrees. At Wagner College he met his love, Marion Andersen, to whom he was married for almost 60 years. He received both his Bachelor and Master of Divinity degrees from Mt. Airy Lutheran Theological Seminary in Philadelphia, Pennsylvania and set out to spread the word of God. In 1956 Pastor Greene served as Chaplain to over 3,000 Boy Scouts at Camp Delmont in PA. From there he served as Assistant Pastor at Trinity Lutheran Church in Staten Island, NY where he was involved in the establishment of the Trinity Lutheran Parochial School. Pastor Greene presented a series of sermons on NBC Television and Radio and played an active role in the Protestant Council "Dial-A-Prayer" program. Pastor Greene commenced his Pastorate at Good Shepherd Lutheran Church in Norwalk, Connecticut in 1962. Under his leadership, a new church was constructed and he ministered to one of the fastest growing Lutheran churches in the New England Synod. In addition to his ministry at Good Shepherd, Pastor Greene served as chaplain at the New England Synod conventions, as well as the Norwalk Hospital, several nursing homes, Kiwanis club and was Chairman of the WNLK Radio Family Devotions. He served as Secretary of the Southern Connecticut District of the New England Synod of the ELCA (Evangelical Lutheran Church of America) for 7 years, as well as serving on the New England Synod Nominating Committee and the New England Synod Committee of Resolution and Counsel. He served on the Board of Directors of the Connecticut Counseling Center, Inc. Pastor Greene was honored to be a Son of the American Revolution where he served as Chaplain of the Roger Sherman Branch #5, CTSSAR. In his retirement, he remained in Norwalk, and stayed active with his friends and family. He wrote and published a Worship and devotional book called "In His Name." He spent time writing, reading and counseling. He loved to fish, play checkers, and tell jokes. In recent years he enjoyed being outdoors where he fed many chipmunks, squirrels and birds by hand. He was predeceased by his loving wife Marion Andersen Greene, his parents, Rev. Russell and Ruth Houghton Greene, and his two sisters, Esther Conklin of Berne and Lois Van Buren of Altamont, NY. He is survived by his brother David Greene of S. Carolina, two daughters Wendy Carter and Lorrie Benko of Norwalk, their supportive husbands, Scott Carter and Drew Benko, cherished grandchildren Paige Carter and her partner Eric Belanger, Reed and Katarina Carter, and his great-grandson Amborssen Carter. Russell leaves behind many loving nieces and nephews and many wonderful and devoted friends. Burial will be private for COVID safety reasons. There will be a celebration of his life at a later date when it is safe for loved ones to gather. In lieu of flowers, donations may be made towards a memorial fund sent to: 2 Green Hill Rd., Norwalk, CT 06850 c/o Wendy Carter. Arrangements are in the care of Collins Funeral Home, Norwalk, CT. Please visit www.collinsfh.com/obituaries to leave condolences.

Share Your Memory of
Russell
Upload Your Memory View All Memories
Be the first to upload a memory!
Share A Memory
Plant a Tree