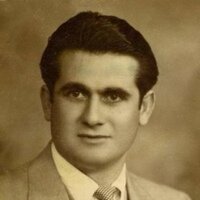 Lazaros Stefanidis, age 97, passed away peacefully on Wednesday, November 16, 2022 at his home in Norwalk surrounded by his loved ones. Lazaros was born April 17, 1925 in Anatoliko, Greece and moved to the United States in 1951. He was later joined by his wife, Valentina Stefanidis in 1956. He began working in the leather manufacturing industry and went on to retire after a successful career in real estate, although he never really stopped working. While he acheived everything he set out to do with little formal education, he always stressed the importance of academics to his daughter and grandchildren. Lazaros also sponsored friends and family who wanted to immigrate to the U.S. and he believed strongly in philanthropy and hard work. In his spare time, Lazaros enjoyed music, photography, gardening, and traveling around the U.S. and Europe. He frequently cooked for friends and family and particularly loved potatoes. While he had many hobbies and interests, he loved to spend time with his grandchildren the most. He is survived by his daughter Ester, and son-in-law Steve, his grandchildren Lazaros and Valentina and his nieces and nephews. He was predeceased by his wife Valentina, daughter Ekaterina, his sister Parthena Kydes and his brothers Konstantinos, Dimitrios, and Savvas Stefanidis. Calling hours will be held on Monday, November 21, from 5-7 PM at Collins Funeral Home, 92 East Avenue Norwalk, CT. Funeral services will take place Tuesday November 22, at 11:00 AMat St. George Greek Orthodox Church, 238 West Rocks Road, Norwalk CT.