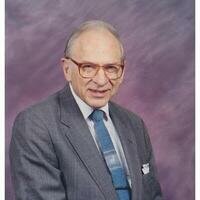 William (Bill) Howard Haas of Norwalk, CT passed peacefully the morning of Thursday, May 19, 2022, at Regional Hospice of Danbury, CT. He was 96 years old and died of natural causes after being ill for three weeks. Bill was predeceased by his wife of 55 years, Emily Pease Haas of Norwalk, his parents, Elsie Meyer Haas & Charles Christian Haas also of Norwalk, and his brother Charles Robert Haas of Vineland, NJ. Surviving Bill are his two sons, Donald Haas of Stamford, and David Haas with his wife Suzanne Haas and Bill’s granddaughter Julia Haas, all of Fairfield. Bill was born on January 9, 1926, at Norwalk Hospital and remained a lifelong resident of Norwalk, CT. He graduated from Norwalk High School (NHS) at age 16 after which he went on to Duke University. During his studies at Duke, he enlisted in WWII with the Navy in 1944 and served two years. He graduated from Duke University with a Bachelor of Science in Chemistry in 1950. Bill and Emily were married at the Norwalk United Methodist Church (NUMC) on Sept. 11, 1954. He worked as a Travel Agent at the AAA AutoClub of New York until his retirement. Bill was also a lifelong member of both Norwalk’s Shore & Country Club, and the NUMC (later changing their name to Cornerstone Community Church). Bill was passionate about his service to the church and served on many missions and committees. He frequently volunteered for causes like HomeFront and at many of Norwalk’s soup kitchens. His hobbies included a love for fine dining and traveling the world—his impressive list of trips include one to Cuba in 1958/59 where Emily and Bill had to depart suddenly as Batista fled Cuba, and Castro aided by the military arrested Cuba’s newly appointed President Cantillo while troops filled the streets. Equally notable, a trip to India where he met Mother Teresa. He also made it a mission to attend dozens of World’s Fairs both domestic and international. Bill was a huge sports fan, following sports such as golf, tennis, basketball, and his beloved New York Yankees. He was also an NHS band superfan and often traveled to Florida and California to watch them perform at bowl games. He proudly received a Governor’s award for his many years of service with the Connecticut Office of Tourism. Bill will be especially remembered for his service and his love of travel, which led him to accomplish visiting 99 different countries. Viewing hours will be held on Wednesday, May 25, 2022, 9:30 am–11:30 am at Raymond Funeral Home, 5 East Wall Street, Norwalk, CT. His funeral will be held that same day at 12:00 pm at the Cornerstone Community Church, 718 West Avenue, Norwalk. Interment will follow in Riverside Cemetery, Norwalk. Bill gave generously to charity and was especially passionate about helping children in need, the environment, and wildlife. In lieu of flowers, please donate to one of these 3-4 star (charitynavigator.org) charities: Children’s Hunger Fund www.childrenshungerfund.org Environmental Defense Fund www.edf.org Wildlife Conservation Society www.wcs.org