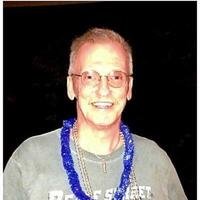 Joel C. Perez Surrounded by loving family, Joel C. Perez, 69 years old, of Norwalk, Conn., died peacefully on July 2, 2021 at Norwalk Hospital. Born June 2, 1952 in Port Chester, New York, he was the son of the late Joseph Perez and Anne Riker, and brother of the late Marlene V. Perez of White Plains, NY and Geraldine Green of Tarrytown, NY. He is survived by his second wife, Megan Reilly, and their four children, Cory Sisterhenm, Abby Cali (and husband Chris), Tim and Jack Sisterhenm; two grandsons, Ben and Tom Cali; as well as many nieces and nephews. His first wife, Carole Nelson, lives in Greenwich, Conn. Joel lived in Norwalk since the early ‘80s when he took a position with FedEx as a courier, a post he kept for 29 years, preferring the daily contact with his customers over working in the office. As the company grew, he grew with it and he served in many areas, from Harrison, NY to his last routes in Darien and Rowayton, Conn., which he held for many years until his retirement in 2010. Joel always had a tender spot for anyone he saw as down-trodden or in need of help, and he’d be the first one to step in. A life-long animal lover, he often would pick up stray or injured animals on his route and make sure they were nursed back to health. He loved gardening whether it was flowers, vegetables, shrubbery or houseplants. In the month after the September 11 attacks, he and family members volunteered with the Red Cross, serving food to the workers on the pile. He particularly loved his 17 summers of volunteering at Camp AmeriKids (now The ELM Project) as a camp counselor in the Bat Cabin for 14- to 16-year-old boys. Joel’s heart grew bigger and softer with each passing year of his life. He will be missed, loved and remembered by his family, friends, co-workers, co-volunteers and many campers. A wake will be held at The Raymond Funeral Home in Historic Norwalk Thursday July 8 from 4:00 to 8:00 p.m. A mass will be held at St. Matthews Church at 10:00 a.m. on Friday, July 9, burial will follow at Riverside Cemetery. If you would like to make any gift in Joel’s memory, the family asks you to consider making a donation to The ELM Project www.elm-project.org